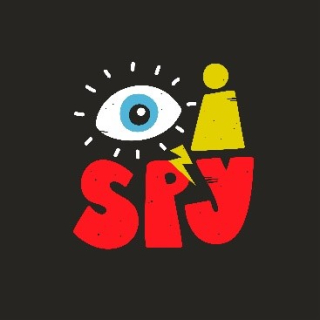 “I-spy”  is an activity many of us remember playing while in the car. This game and others like it not only helped us pass the time but also helped us focus on what was on the road around us. For some, these games, and just a general awareness of what is happening outside the vehicle, have been replaced by focusing on our hand-held devices. This focus inside rather than outside of the vehicle can cause safety issues for you as well as the maintenance vehicles working alongside the road.

We’ve worked for years to increase the visibility of our work zones and larger trucks. But many Iowa Department of Transportation employees are also out on the road in small vehicles like pick-up trucks. Our field forces often need to pull these pick-ups to the side of the road to perform tasks. Making them as visible as possible to passing motorists who may not be paying as much attention as they should is the focus of a recent project for our Maintenance Task Force. 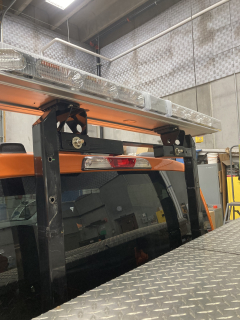 The first part of the solution was to improve the rear-facing lights on each pickup. The group determined a 54-inch light bar should be installed on all supervisor’s pick-up trucks because they have the highest exposure to being hit, especially when they are out checking roads in winter weather.

Rustal Martin, the garage operations assistant in our Tama garage, said, “The light bars were very easy to install. The smaller ones had the same bolt patterns as our old ones, but they sit up higher and are much brighter than the old ones.”

For many other pick-up trucks used by workers on construction projects, smaller light bars were chosen.

Fisher said, “This is a major improvement over our previous lighting. The light bars have been installed and we’ll be looking for feedback on how employees feel they are impacting safety. Using that feedback, we’ll create a standardized specification for these lighting packages in the future.”

The second part of the solution involved the task force reviewing the chevron decals to be placed on the backs of the smaller vehicles and impact attenuator trailers. Derrick Greenfield, the safety garage operations assistant in our central Iowa District 1 office, said, “The orange and white chevrons that had come factory on our attenuators just didn’t seem to stand out as much as we would like. We did our research and found that the industry standard is shifting to strong yellow-green and red color schemes. We worked with the Traffic and Safety Bureau to get their input.”

Fisher said, “This chevron color combination is being used more and more by maintenance and emergency vehicles. The color contrast does a good job drawing desperately needed attention to the work crew on the side of the road.”

Once the color scheme was determined, the group reached out to vendors to get cost estimates. Greenfield said, “We asked our sign shop if they would be able to produce these and what the cost would be. It turns out they were not only able to do the job, but they could also get it done for significantly less money – six to seven times less than the outside vendors.”

Because the cost was relatively low at $100 per vehicle and the impact is expected to be high, the task force decided to outfit both the small fleet vehicles and the impact attenuator trailers. Since the trailers were more easily outfitted, they were updated first. Greenfield said, “All the attenuators now have the new chevrons and the feedback we’re getting from the field is that they are a great addition. 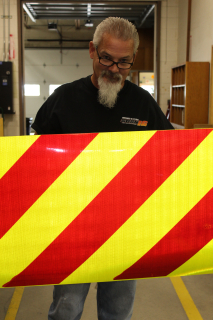 Chris Wirth from the sign shop with one of the chevron panels.

Fisher added, “Because we have so many makes and models of pickups, the garage operations assistants are working on making templates and standardizing printing the chevrons for them so they can easily be modified and installed by our own folks to each truck in the field. Once we have this done, we are hoping to incorporate the new chevrons into the standards when we order new pickups.”  The small fleet chevrons are currently in production at Iowa DOT’s sign shop and will be distributed district by district as they are completed.

Fisher added, “Increasing the visibility of our vehicles on the road is a priority as part of our ‘Safety First’ and ‘People Matter’ core values. There have been a lot of hands involved in this lighting and chevron project and it really shows what can be done when a dedicated group works for a common goal.”

This lighting and chevron project reinforces that we have amazing people in the field that are bringing forth new creative ideas on how to make their own work environment safer for themselves and their co-workers.

Hey Dave - that's a great question. I passed it along to Jason Fisher in Maintenance. He will be reaching out to you directly or you can shoot him an email. Thanks!

I'm an HT out of the Malcom shop, I work on the construction side in the summer. I'm usually working the patching projects at night, by myself marking the patches out, until the contractor gets in the area to start working. Several times this fall, I've had vehicles come close to hitting me while sitting in the Colorado pickup while writing down information and no other vehicles around them for them not to get over. I guess my question is. When will we see the light bars on the smaller trucks at least on the construction side that have to work at nights? Granted it's not going to make everybody get over, but it might help a little