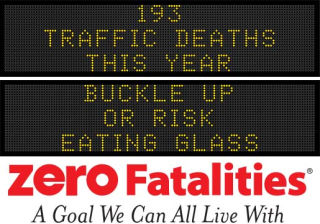 Take a minute to think about this - more than half of the people killed in vehicle crashes in the United States in 2020 weren’t wearing seat belts. So far this year in Iowa, nearly 45 percent of those killed were unbelted. In our state, that means 60 mothers, fathers, sons, and daughters are not enjoying the summer with their families when the simple click of a seat belt might have saved their lives.

One word may come to your mind when pondering these senseless deaths. “Why - why weren’t these people bucked up?”

Here are some common excuses.

As careful as you might be, others may not be as careful. Buckling up is one way to protect you and those in your vehicle from the mistakes of other drivers.

That’s the point. You are restrained. When a vehicle comes to a sudden stop, being restrained means your soft body won’t keep moving until it hits something solid and unforgiving. Objects in motion tend to stay in motion.

Many crashes happen close to home. And you don’t have to be traveling at highway speeds for a crash to severely injure you.

4. “I don’t want to get stuck inside the car during a crash.”

You don’t want to be ejected. Trust us on this one. You’re about 75 percent more likely to die if you’re ejected from your vehicle. The body of your vehicle is meant to absorb the energy of an impact and keep the passenger compartment intact, but you need to buckle up for that to keep you safe. In addition, not wearing your seat belt increases the chance you’ll be knocked unconscious or physically incapacitated in a crash, and unable to free yourself.

5. “Seatbelts cause injuries during crashes.”

Think about it: If you’re in a severe enough collision that a properly worn seatbelt bruises you, the injuries that you would have suffered if you weren’t wearing it would have been worse. A lot worse.

How do you protect your kids? Buckle them in. Read the Boughton’s story at https://www.transportationmatters.iowadot.gov/2019/08/se-iowa-family-credit-seat-belts-for-saving-them-in-a-crash.html

In Iowa in 2022, there have been 193 deaths in traffic crashes. That’s an increase of 10 since last Friday. To see statistics published daily by the Office of Driver Services, go to the daily fatality report at https://www.iowadot.gov/mvd/stats/daily.pdf