This is the first in a series of stories of how Iowa transportation projects impact the lives of our friends and neighbors, improving safety and making lives better through transportation.

In March 2019, a bomb cyclone struck several western and midwestern states, dropping intense rain and melting heavy snowpack on frozen ground. The subsequent runoff breached levees, flooded roadways, and decimated communities. One of those flooded roadways, Iowa 2 in Fremont County, severed the Iowa/Nebraska 2 corridor, which connects I-80 in Lincoln, Nebraska, to I-29 in Iowa. This unique connection is vital for commercial traffic traversing the region and area residents who live on one side of the Missouri River and work on the other. When Iowa 2 flooded and was closed, a commute for the locals that typically took 10-15 minutes suddenly turned into a 60-90- minute trip, and freight traffic was impacted at a similar level. 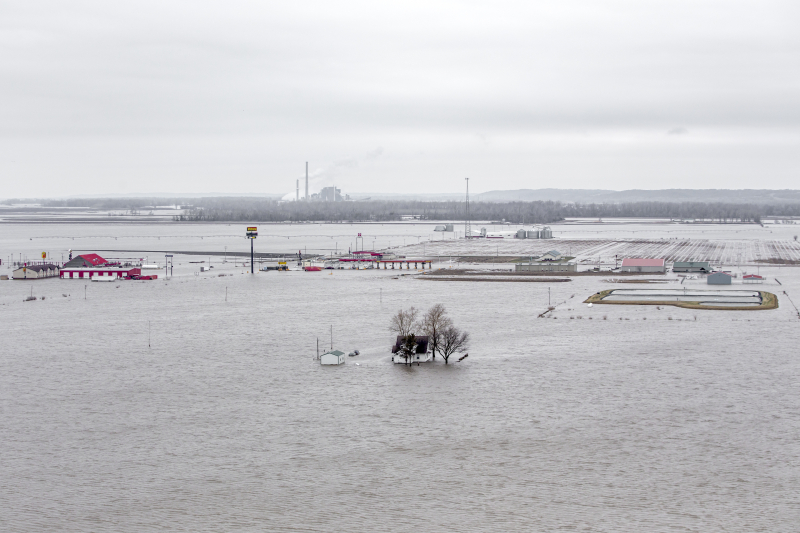 Businesses at the Iowa 2 interchange with I-29 were inundated with water for months following the March 2019 bomb cyclone.

Doug Friedli, executive director of the Missouri River Basin Lewis and Clark Center located on Nebraska 2 just over the river from Iowa recounted the impacts on the neighboring communities.  He said, “This wasn’t a ‘normal’ flooding situation. The Missouri River was out of its banks for 270 days. Houses and businesses were destroyed, and many people were permanently displaced.”

For those who stayed, Friedli said daily life changed drastically when Iowa 2 was closed. “So many people count on that river crossing because they live on one side of the river and work on the other,” he explained. “That longer commute meant some people had to leave their families and rent apartments or camp in campgrounds closer to work. Some employers rented hotel rooms for employees. But some people simply had to quit really good jobs because of the commute.”

Wes Mayberry, the Iowa Department of Transportation’s assistant district engineer for Southwest Iowa, said, “As you can imagine, we had a lot of calls to our office. We took to heart all the stories of families trying to work out daycare issues with the added commuting time and struggling to make ends meet with the added expenses. We understood the issues. Our own employees and their families and friends live in these communities. They help provide local volunteer services like law enforcement, fire, and EMS, as well as serving on community boards.  The flooding wasn’t something we were watching from afar, it directly impacted all of us.” 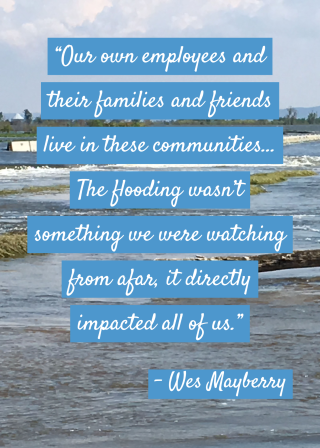 Those who stayed also faced increased response time from first responders. Sgt. Andrew Wake of the Fremont County Sheriff’s Office said, “We had increased calls for service because the detour routes were so long, and they were looking for shortcuts. People were trying to drive over the levees and when construction started for the repairs, we had many calls for crashes in the construction zones because people didn’t pay attention to the signs and traffic control. Our emergency service providers had limited access due to the flooded and damaged roads. That increased response times which could mean life or death to someone who was having a medical issue or was involved in a crash. Seconds matter in those types of emergencies. ”

Tony Carr, a reserve deputy for the Fremont County Sheriff’s Office, was part of the response team time during the flood. “We were dealing with so many things. Sightseers were coming to the area and getting stranded. We were having to put lives at risk to rescue them. In the early part, conditions were changing very quickly, but people were still trying to get through on flooded roads. We relied on well-trained volunteers quite a bit to help with the law enforcement in the area.”

Austin Yates, the Iowa Department of Transportation’s operations engineer for the area, said, “Along with significant impact to the local residents, we were also facing a disruption in freight traffic. This corridor is used by carriers from coast to coast.”

As the closure of Iowa 2 continued through March, April, and into May the area agricultural industry became impacted. It was springtime in rural America and those farm fields that were not underwater needed to be prepped for planting. Moving large farm equipment across the river became a significant trial. 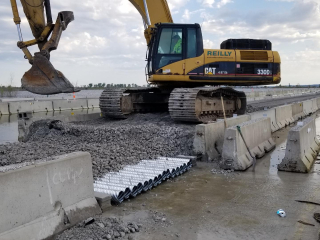 After more than two long, frustrating months, limited access was restored on Iowa 2 using a temporary solution consisting of concrete barrier panels along the edge of the road to keep vehicles on the roadway and permeable rock laid on the roadway to provide a surface for traffic to pass across while allowing water to continue to flow. This solution restored mobility without causing water to be pushed to surrounding land and increasing the flooding in those areas. During the next two months, those using the roadway were affected by intermittent closures due to flooding. Thankfully by mid-July waters had receded to the point temporary pavement could be put in place on Iowa 2 to increase reliability and mobility.

Iowa DOT understood the impact the roadway had on commercial drivers as well as those who relied on the road for their livelihood. During this period, they attacked the damaged roadways on two fronts, getting temporary solutions in place for the short-term and developing plans for long-term fixes that would include measures for resiliency in future flooding events.

The long-term solutions were three-fold. 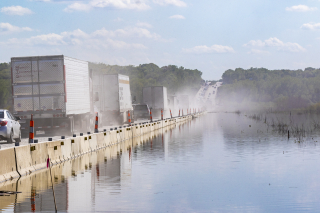 After more than two long, frustrating months, limited access was restored on Iowa 2 using a temporary solution consisting of concrete barrier panels along the edge of the road to keep vehicles on the roadway and permeable rock laid on the roadway to provide a surface for traffic to pass across while allowing water to continue to flow.

Time was of the essence to get both short- and long-term solutions in place to keep people and freight moving safely and securely through this corridor. The first order of business was relocating a federal levee and constructing dual 1,100-foot-long overflow bridges. Together, these projects eliminated a levee bottleneck and improved the flow of the river while reducing flood risk. The new bridges not only reduced the flood risk, but they also helped motorists more safely travel this highway corridor connecting Iowa and Nebraska by reducing congestion and delays that were being seen along the detour route.

These efforts took unprecedented cooperation between local, state, and federal officials. The United State Army Corps of Engineers approved permits for the projects in under three months, an unprecedented feat for USACE levee relocation in Iowa.

When the Iowa DOT put the project out for our contractors to review and bid, the area was still under seven feet of water. This made it exceedingly difficult for contractors to get a good look at the scope of the project, but they stepped up to the task in a big way. Iowa DOT staff worked alongside our industry partners to make sure these overflow bridges could be built safely, quickly, and would stand the test of time. 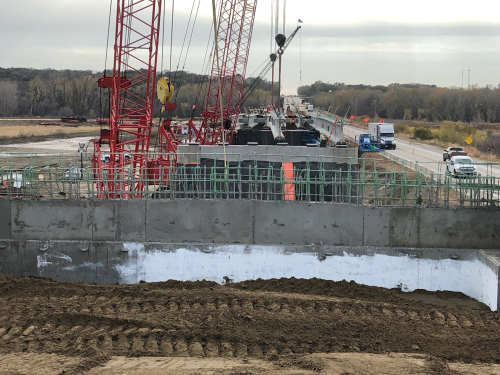 The unprecedented level of cooperation between federal and state officials and our industry partners resulted in the project team completing the levee and bridge design in just nine weeks. Understanding the urgency to get a permanent solution in place to keep travelers in the area moving, the first bridge was constructed and opened in six months, more than two months ahead of schedule. The entire project was completed in fifteen months, more than a year ahead of schedule. 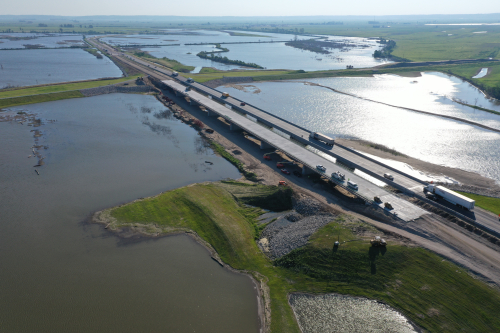 Friedli commented, “We were very grateful for the way the levee move and overflow bridges were done so quickly. We really felt like they were doing all they could to get the area moving again when we could see the work going on 24/7. The effort was unbelievable.”

The collaborative, cooperative project aligned the Iowa DOT, USACE, Federal Highway Administration, the local levee district, and Iowa’s contracting community in a way that has rarely been seen. It allowed the project to move forward quickly and solidified relationships that may follow into other transportation projects to improve mobility in the area.

With the levee relocated and the overflow bridges open, the Iowa DOT moved to phase two, raising the height of the pavement on Iowa 2 and constructing four smaller bridges to assist with flood control. These smaller projects may not have had the fanfare of the larger bridge project, but they are vital to reducing future flood risks and maintaining mobility.

But the work isn’t completed in this area. A new project is now focused on the construction of a dike to protect the I-29/Iowa 2 interchange and the nearby businesses. The project will increase the likelihood that the interchange will remain open and local businesses will be safer from future flooding.

Jeremy Vortherms, an Iowa DOT engineer who has worked on this project since the beginning, said, “The protective dike will be designed to keep the area as dry as possible. This is another example of the high level of cooperation that we are proud to be a part of. For the dike, we’ll be partnering with a new drainage district board in the area. As the landowner, we’ll provide the funding, but an outside consultant has provided the design.”

Yates explains, “The steps we took will not make the area bulletproof. If another scenario like the one we had in 2019 is repeated, the roads will flood. But the work that has been completed and the work that continues will lessen the impact when the next catastrophic flood comes our way. The way the system is built, it will sustain less damage and we’ll be able to get things opened up to get people and goods moving again quicker.”

Lessons learned through the flooding and the efforts taken to preserve movement on Iowa 2 in case of future flooding have improved the way we do business in the future. We continue to keep a focus on the users of the system and keep our commitment to make lives better through transportation.