Roadside Chat - Speeding for deals could make your Friday black 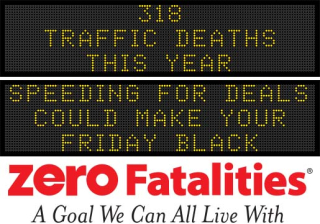 Getting a great deal on that coveted holiday gift can make you feel like you’ve won the lottery. Although many deals are found online these days, some folks still venture out to the stores on the day after Thanksgiving in search of those deals. If you’re one of those, slow and steady may be your best course of action.

In 2020, 158 deaths were attributed to drivers who were aggressive behind the wheel. Law enforcement is out trying to curb the problem. In 2020, the Iowa State Patrol reported issuing 1,497 speeding citations. That’s more than double the 659 citations issued in 2019.

But just issuing tickets won’t get everyone to slow down. We all have to alter our behavior behind the wheel and understand that exceeding the speed limit can cause harm to ourselves, the ones we love, and everyone on the roadways with us. Whether you’re involved in a single-vehicle crash where you’re the only one who ends up in the emergency room or you crash into a family’s minivan, there are consequences to your actions that impact those around you.

Even a small increase in speed can significantly increase the danger of injury or death in a crash - https://youtu.be/tZChyjaqNBI

In 2021, there have been 318 deaths in traffic crashes. That is an increase of six since last Friday. To see statistics published daily by the Office of Driver Services, go to the daily fatality report at https://www.iowadot.gov/mvd/stats/daily.pdf