Subtle changes will make getting around Des Moines metro safer 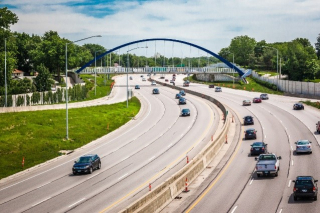 Big changes like adding lanes of traffic or building a new bridge get lots of attention. While those types of projects get the spotlight, many smaller improvements taking place, especially in the Des Moines area, are geared toward helping you get where you need to go more safely, reliably, and efficiently. Look for these tweaks from the Iowa Department of Transportation on your upcoming travels around the Des Moines metro. 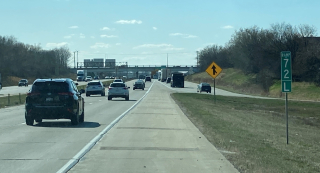 If you’ve traveled much around Des Moines, you know that the area includes two interchanges, one on the east side and one on the west side of the metro that connect major interstates. Commonly called “mixmasters” they are made up of many ramps connecting different directions of travel of Interstates 35, 80, and 235. If you are unlucky enough to be in an incident, witness a crash, or just see something that needs attention on one of the mixmasters, getting the best information about the exact location to the 911 dispatcher is critical to help emergency crews quickly respond. 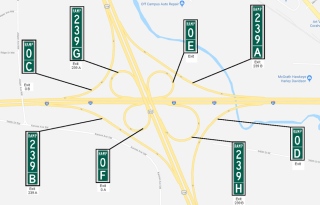 Recently, you may have noticed new ramp signs that designate not only a milepost number but a letter to identify each ramp. Ben Hucker, a traffic engineer working to increase mobility in the Des Moines area, explains. “Particularly at the mixmasters, it’s important that if you are involved in or see an incident and call 911 that you’re able to identify the exact ramp so that the dispatcher will know the direction of travel where the crash happened. That helps emergency responders get to the scene quicker since they know exactly where they are needed within that interchange. It will help them avoid wasting time coming from the wrong direction and having to turn around to get to you.”

Getting the ramp naming information out to the area’s four 911dispatch centers is also a key element of the project. Hucker said, “The four dispatch centers in the Des Moines metro sometimes have overlaps in coverage, so making sure each of the centers has accurate, up-to-date information on the ramp names will help them communicate better with each other and the emergency responders they dispatch.” 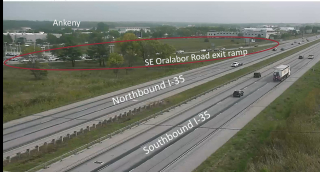 Have you ever tried to exit the interstate and the traffic signals at the top of the ramp or nearby intersections don’t seem to work together well enough? Sometimes traffic can back up all the way onto the interstate, which doesn’t allow vehicles to flow smoothly and creates an unsafe situation. In the Des Moines metro, this issue is especially pronounced at Ankeny's southbound I-35 exit ramp to SE Oralabor Road.

To improve traffic flow in this area, a project is planned for 2022 will connect traffic lights to sensors that detect backed-up traffic and will automatically adjust signal timing. Hucker said, “Right now we’re studying the traffic patterns and will be treating this area as one cohesive corridor, instead of a series of individual intersections. This collaboration with the City of Ankeny should help traffic flow much more smoothly in this area.”

Another element that is being considered are signs along the ramps and on the interstate near this interchange that would also be connected to the sensors. Hucker said, “When a back-up is detected, the signs could automatically display a message to travelers warning of slow or stopped traffic ahead, allowing drivers to be prepared to stop.”

Hucker added that coordinated traffic signal technology is also being studied for the Merle Hay Road corridor from Hickman Road in Des Moines to 62nd Street in Johnston.

On many highways, barriers are put in place to safely separate vehicles traveling in different directions. Many of these barriers are solid with no breaks on Interstates 35, 80, and 235 in the Des Moines area. Solid barriers provide you with substantial protection from oncoming traffic, but they can pose an issue for emergency personnel. A new median barrier gate is being installed in 2022 in the Des Moines metro to help responders get to you more quickly in the event of a crash. The new gate will allow emergency personnel to access the opposing traffic lanes quicker than continuing to the next interchange to turn around to respond to an incident. The quicker responders get to you the quicker they can get you the help and attention you need. In addition, the risk of secondary crashes increases the longer the first crash remains on the roadway. The quicker they can get your crash cleared off the road, the less danger there is to you and others.

Making this project happen took the collaboration of a variety of groups including transportation agencies, metropolitan planning organizations, law enforcement, emergency responders, and others. Gary Kretlow, an Iowa DOT traffic technician in Central Iowa, said, “As a group, there were several considerations we had to weigh when we were choosing our gate options, like the ease of operation, maintenance needs, how it functioned in severe weather, and how fast it could open. The option we chose has the ability to be activated remotely, either from a law enforcement communications center or our traffic management center, which can help reduce response times because responders will not have to move the gate manually to get through. This remote option also provides for well-trained staff who are available 24/7 to assist first responders with the gate.”

The first gate is expected to be installed on I-35/80 between the Merle Hay Road and IA 415 (2nd Avenue) interchanges in 2022.  We will add a second gate between the northeast mixmaster and the U.S. 65 bypass along I-80 in 2024 or 2025.  Additional locations may be considered in the future. Although this is the first installation of the specific type of gate in the United States, they are in use in many areas of Asia and Europe.