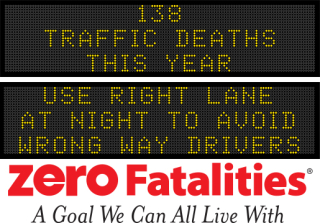 You’re on the interstate. You know that traffic in the two lanes on your side of the highway should be going in the same direction. What would you do if you see headlights coming at you?

Nationwide, statistics show that the majority, approximately 60 percent, of wrong-way drivers are impaired. Of the remaining 40 percent, half of those have been shown to be elderly and the other half are simply confused.

Luckily, the vast majority of wrong way drivers realize their error and turn around without causing a crash. But if a wrong-way driver is involved in a crash, it is typically severe because of the way these crashes tend to happen. They are often head-on collisions that occur on a hill, where both drivers are traveling at highway speeds and the unsuspecting right-way driver isn’t expecting to see an oncoming vehicle in the same lane.

So, what can you do? If you are traveling on a four-lane divided highway, especially at night, the safest lane is the right lane. Even if you come upon a wrong-way driver, they are likely going to be in the left lane.

This video shows just a few of the many wrong way driving incidents captured on U.S. 30 between Nevada and Boone -

So far in 2021, there have been 138 deaths in traffic crashes. That is an increase of seven since last Monday. To see statistics published daily by the Office of Driver Services, go to the daily fatality report at https://www.iowadot.gov/mvd/stats/daily.pdf