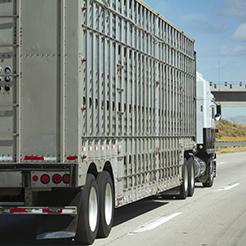 It’s not unusual to travel down an Iowa interstate alongside a semi loaded with livestock or poultry. Easy access to world-class transportation and an abundance of corn and soybeans grown here make Iowa ideally suited for raising these animals. What we don’t often see, but can be a real issue, is the aftermath when one of these livestock trucks crashes, tying up a busy highway for hours, delaying your trip and increasing the risk of secondary crashes in the area. 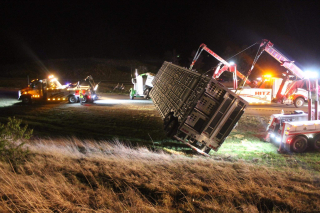 The more people you have at a crash scene, the higher the risk.  These types of crashes often require the assistance of animal handlers and veterinarians who aren’t used to being alongside a busy highway in a stressful situation. Other unusual tasks such as rounding up loose animals and constructing temporary holding pens may be needed and cause additional delays and complications at the crash site. If the first responders are not trained in how to deal with traffic crashes involving livestock, the risk to the people at the scene, the animals, and drivers near the incident increases.

To help educate responders, the Iowa Pork Producers Association developed a webinar series highlighting specific challenges when a livestock carrier is involved in a crash. Jamee Eggers from the Iowa Pork Producers Association explained why the training was initiated.  “We recognized that crashes, especially roll-over crashes that involve livestock, can impact both public safety and animal welfare,” she said. “We developed this series that includes topics like animal handling and scene management to help responders understand what they might encounter. First responders aren’t typically trained animal handlers and animal handlers don’t typically understand traffic incident management. The more we can educate first responders on what to expect and who to contact, the safer we’ll all be in the event of an incident.” 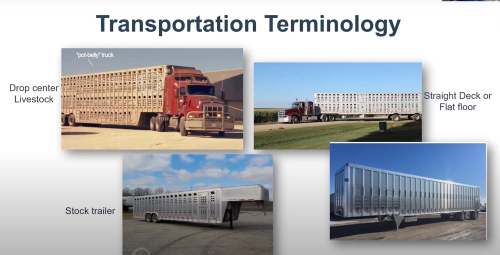 Part of the training includes updates on what types of trailers responders may encounter.

Because these incidents don’t happen regularly, Eggers said there really are no trends or consistency in response. “It’s particularly important in these types of crashes that responders have relationships with animal handlers and veterinarians so they can reach out quickly. Finding rescue trailers and other equipment is another topic we touch on in the series.”

Bonnie Castillo who works with traffic incident management for the Iowa Department of Transportation said, “From a road user perspective, the cost of these incidents is very high because they often take several hours to clear. Much of that time is spent trying to find the resources to provide care for the animals involved. If we can get the word out to responders on who to contact, that will speed up clearance times, reducing the inconvenience and increasing safety to the other drivers on the road.”

Castillo continued, “The responders are very well trained on dealing with human crash victims, but not necessarily livestock and especially animals that may be injured. Since these types of crashes tend to take hours to be removed, it’s critical that responders know who to call to care for the livestock that are involved, but also maintain the safety and  security of the crash scene.”

Webinar attendees are updated on regulations related to animal handling.

Bringing people to crash scenes who don’t have experience in traffic incident management or chain-of-command can be a challenge in and of itself. “In one of the sessions we go over basic scene management and chain-of-command,” said Eggers. “This helps responders explain these elements to animal handlers and others who are called to the scene who may have never been involved in an effort like this before.”

Eggers says the response to the webinars has been very positive. “We used real-world examples that resonated with the attendees,” she said. “These examples generated a lot of great questions and allowed us to provide resources that folks may not have been aware of. The series started conversations between people who don’t typically interact, but the relationships are essential in an emergency situation.” 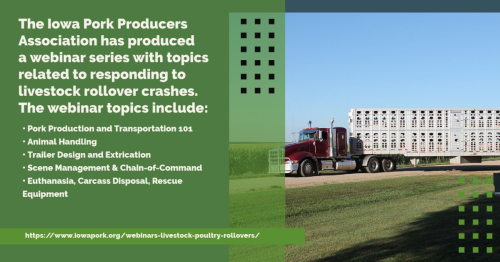 This training is also being considered as part of the Statewide Traffic Incident Management conference being planned for 2022. Castillo said exercises with Iowa DOT district staff, the Iowa State Patrol, and others are also in the planning stages as funding is available. Eggers said, “Iowa pig farmers prioritize both animal welfares and human safety. We appreciate this partnership with DOT to help address both issues.”