Message Monday - Only the casserole should be baked. Don't drive high 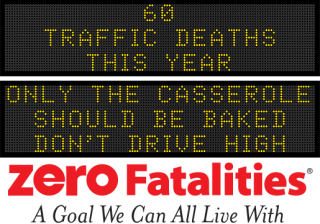 Since the state of Colorado legalized the use of recreational marijuana in 2014, that state has continued to see an increase in cannabis-related traffic crashes and fatalities. In 2018, 13.5 percent of drivers involved in fatal crashes in Colorado tested positive for cannabis. It’s important to remember that even if marijuana use is legal in a state, driving impaired is not. As Iowa’s neighboring states legalize recreational marijuana, we’re bracing for an uptick in impaired driving crashes and fatalities here, too.

In a recent research report, (https://www.drugabuse.gov/publications/research-reports/marijuana/does-marijuana-use-affect-driving) the National Institute on Drug Abuse found a significant tie between THC (the impairing chemical in marijuana) and driving impairment.

One AAA Foundation for Traffic Safety survey (https://aaafoundation.org/2018-traffic-safety-culture-index/)  found that:

Research at the National Advanced Driving Simulator at the University of Iowa is delving into the dangers of impaired driving https://www.pbs.org/newshour/science/virtual-reality-spots-best-way-catch-stoned-drivers.

So far in 2021, there have been 60 deaths in traffic crashes. That is an increase of four since last Monday. To see statistics published daily by the Office of Driver Services, go to the daily fatality report at https://www.iowadot.gov/mvd/stats/daily.pdf

Thank you for your work on the boards. It's the highlight of my commute!