Message Monday - Rushing is a safe choice in football, not on the highway 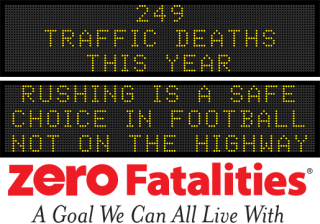 Having a fleet-footed, sure-handed ball carrier is an asset to any football team. That speed on the ground can win the game for your team. Speed on the road is another thing. If a football player fumbles on the field, the risks are not life-threatening, but a speeding driver who makes a mistake could endanger many.

Many research studies have shown that even small increases in speed significantly extend the distance it takes to stop, which increases the likelihood and severity of crashes.

With more people are getting out and about traffic levels are increasing on Iowa highways. With that increased traffic, we’re seeing an increase in the number of fatalities. Some of the highest fatalities numbers in a decade were recorded in July and August.

Although we won’t know the definitive causes of these recent Iowa crashes until all investigations are complete, there has been a significant uptick in speeding violations issued by all branches of law enforcement, with the number of tickets for 100+ mph skyrocketing.

For 2020, there have been 249 fatalities reported. That is an increase of 10 since last Monday. To see statistics published daily by the Driver Services Bureau, go to the daily fatality report at https://www.iowadot.gov/mvd/stats/daily.pdf