Message Monday - If you could use your blinker, that'd be great... 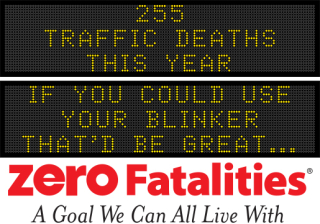 Not a turn signal user? You’re not alone. A 2012 Society of Automotive Engineers study based on observing the actions of 12,000 drivers on public roads found that nearly half neglected to signal before making a lane change.

Since the technology of the turn signal hasn’t changed much since it was patented in 1925 by Edgar A. Walz, Jr., the reason why people don’t signal likely has little to do with not knowing how to flick the lever. So why don’t some people signal their intentions behind the wheel?

Here are some reasons from the study noted above:

But, as it turns out, using your blinker can have a positive cognitive impact on the driver who uses it. https://www.nytimes.com/2019/06/20/smarter-living/use-your-turn-signal.html

For 2020, there have been 255 fatalities reported. That is an increase of six since last Monday. To see statistics published daily by the Driver Services Bureau, go to the daily fatality report at https://www.iowadot.gov/mvd/stats/daily.pdf

Now that we have everyone washing their hands correctly.