Slow-moving maintenance activities, like painting pavement markings, are some of the most dangerous parts of the work our field forces need to get done. Typically, our own crews use equipment to apply a layer of water-borne paint and then drop a layer of tiny glass beads into the wet paint. The glass beads reflect light, which makes the lines more visible at night. But, because this is Iowa and our harsh weather conditions require snow-removal equipment that can scrape off the paint and glass beads, many of our roads, and especially our interstate markings, need to be repainted every year. The nature of the work means we have to paint the lane markings while traffic is speeding by, increasing the danger for both travelers and our crews.

Always looking for a better way to do things, our staff is testing a new epoxy paint system applied in grooves on Iowa interstates this summer. Iowa DOT engineers John Hart and Clayton Burke, of our Construction and Materials Bureau, are spearheading the effort to improve paint markings.

Placing the new paint into groves was first tested in the Council Bluffs area. 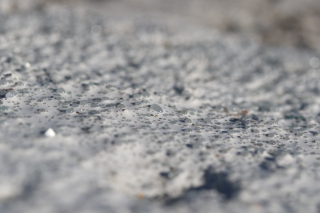 The epoxy-like paint and glass beads will be longer lasting and reflect better than water-born paint systems.

In addition to applying the paint into a groove, which will help it stay on the road longer, the new system uses a process where chemicals are mixed together and harden like an epoxy. Glass beads are also dropped into the surface of the paint before it hardens. The combination produces a pavement marking with a very durable finish. Hart said, “From our research, we’re expecting the new pavement markings to last four years. Not having crews painting the interstate lines every year will be a significant safety improvement. Because the groove is about two times deeper than the layer of paint, we expect to be able to apply new paint two times before the groove will need to be cleaned out or a new groove cut into the pavement.”

Hart explained that many of the states surrounding Iowa already use the paint system, but it is a shift in thinking for us. “We have our own equipment and crews that are set up for the water-borne paint.” He said, “This new pavement marking system requires completely different materials and different equipment. Instead of buying this new equipment, we have found contractors that will complete the work on new construction projects on interstates. Once we expand the use of this type of paint on all interstates using contractors, our crews will be free to concentrate on our two – and four-lane roads, which will eventually increase the frequency that we can repaint those lane markings increasing safety on those roads, as well.”

Clayton Burke, who has been working with Hart, says there are other unique features that will not only improve safety now, but far into the future. He said, “In addition to the change in material and placement, the new markings are six inches wide, compared to our standard four-inch paint lines.” 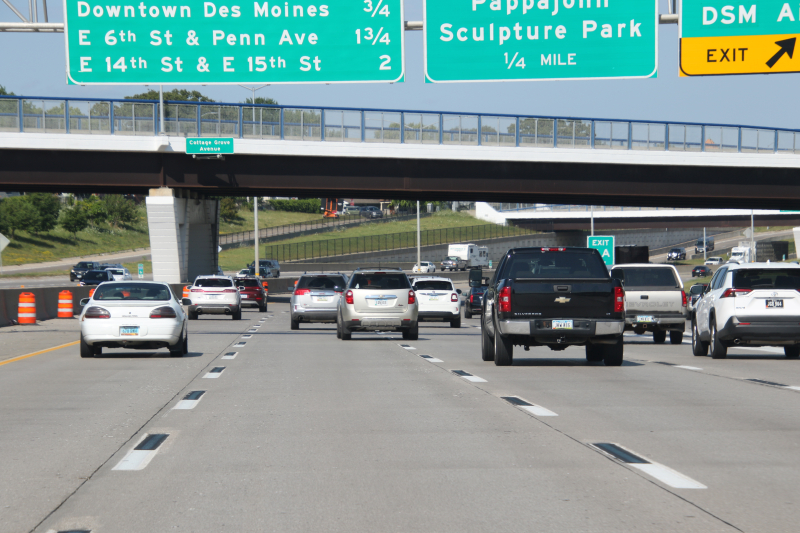 "Skip dashes” with white and black markings have been shown to be much more visible to traffic, especially in low light or rainy conditions.

Other improvements include high contrast “skip dashes” between lanes. Burke said, “Drivers will start to see white and black markings between the lanes of travel. These high-contrast markings make seeing the lanes much easier in lower light and rainy conditions, especially on concrete surfaces.”

Research on this new method of marking roads isn’t simply geared towards today’s drivers. Burke explained, “The wider and more visible paint markings will certainly help the current vehicles that are equipped with safety features like lane-keeping assist, but we are also planning for the future where these lines will help autonomous vehicles of the future ‘see’ the road better.”

My late husband, Jack Gordon, was with the District 1 Paint Crew 15+ years retiring in Dec. 1998.

Has the paint been changed so they NO longer work with INGREDIENTS CAUSING CANCER?

Just checking since I received this update on painting procedure. I was wondering why I was seeing some black strips on the white areas too; now I know why! Thanks!

I had his brain autopsied and these are the results due to his strange, weird behaviors prior to his death:

lyme disease/neuroborreliosis;
cluster of filarial nematode parasitic worms having LYME inside of them!
and lewy body dementia causing his visual and very violent hallucinations like actor/comedian Robin Williams had!

Jack's brain made WORLDWIDE HISTORY having lyme and lewy body dementia; 1st to be discovered.

His case was to be published in a scientific medical journal; but dr. didn't follow through on his promise to me.

2nd brain autopsy was done in hopes Jack's case would be PUBLISHED this time:

She didn't publish either as promised.

Glad to see the DOT planning for the future, not just accommodating the present.