Iowa DOT crew helps save lives in I-80 crash 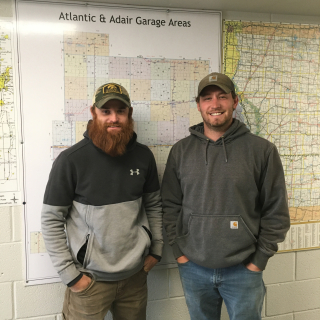 Our field forces hear and see a lot of things out on the road, but what Alex Bireline and Brett Gettler, highway technician associates in our Adair shop, heard and saw on April 24 was a first for them.

The two were repairing a sign along Interstate 80 when they heard what sounded like a crash down the road. “We didn’t actually see the crash,” said Bireline, “but we definitely heard it. I told Brett that we needed to get to the crash. He was already on the phone calling 911.”

It turns out the sound the two heard was a crash between a semi and a minivan near exit 64 in Cass County. When they got to the area, there were five other people on the scene and someone was already assisting the injured passenger from the minivan. The minivan driver and the semi driver weren’t hurt. Gettler said, “The injured man needed a tourniquet, and the person giving first aid didn’t have anything, so I gave them my belt to use.”

Because the crash pushed the minivan into the ditch and the semi was safely parked on the shoulder, there was no impact on traffic, but the two stayed on the scene until first responders arrived. “It was about 10-15 minutes before law enforcement got there and they needed to call a medical helicopter for the injured man,” said Gettler. “I was talking to the woman who had been driving the minivan, trying to keep her calm until help arrived.”

Once law enforcement and medical personnel secured the scene, Bireline and Gettler got back to work on the sign. Bireline said, “Luckily, a crash like that isn’t something we see every day, but I’m glad we had the incident management and first aid training we needed and were close so we could help.”

Thank you! Good to know DOT folks are trained to help out.

Thanks for all you do!

Great story nice to know the workers are paying attention !!! Thank You guys !!!!

makes me feel safer on the road... Thanks!

Very nice work guys, you saved the day.
Thank you for sharing.