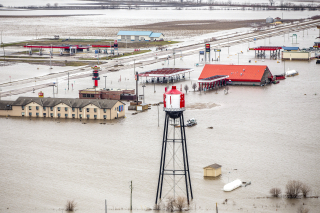 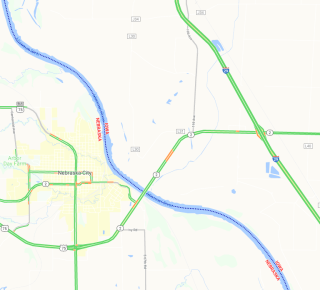 Iowa 2 in this area is a four-lane roadway connecting Fremont County, Iowa to Nebraska City, Nebraska.

By the summer of 2019, Governor Kim Reynolds and her staff, working with surrounding state governors, surveyed the area and began collaborating closely with the Army Corps of Engineers, the Iowa Department of Transportation, and other groups with the ability to impact the situation. One specific area of concern is on Iowa 2 linking Iowa and Nebraska at Nebraska City. 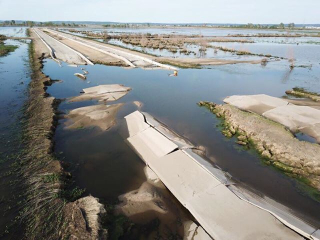 “One specific challenge to the Iowa DOT was to find a way to remove the pinch point Iowa 2 creates on the levee system west of I-29. In this section of the river, the rock bluff on the Nebraska side and the roadway embankment on the Iowa side create a narrow opening. The constriction increases the velocity in which the water flows through this section of river which elevates the risk of levee damage,” said Jeremy Vortherms, an Iowa DOT engineer in the Project Management Bureau.

The solution included the construction of a pair of bridges on Iowa 2 to allow water to flow through a wider opening at a reduced velocity during flooding events. Vortherms said, “Mother Nature will always bring unique weather events that are difficult to solve, but with the historical data we have for this area, we were confident these twin bridges would provide a benefit to the levee and transportation systems, and to the people who rely on them.”

The project included reconstruction of approximately 0.8 miles of the highway, including the construction of two 1,200-foot bridges (one for each direction of travel) and setting back a portion of the existing levee.

The solution is realized

Iowa DOT engineers Paul Flattery and Kelly Bell were tasked with designing the roadway around the structures. Consultant designers completed the bridge and levee portions of the project. With all partners working together, two-way traffic was shifted onto the new eastbound bridge on Dec. 6, 2019, a mere five months after the contractor was selected. The westbound bridge is now under construction and expected to be completed by the fall of 2020. Vortherms said, “We saw the importance of getting that bridge completed quickly.  In late December, water started flowing against the new levee and under the bridge due to continued flooding in the area.”

Vortherms continued, “The project goal to allow water to flow under at least one of the new bridges by spring 2020 has been accomplished. Everyone involved in the project understood the urgency of getting traffic moving in this area by this spring and pulled it together in very quickly. With our top-notch team putting together a simple, yet effective plan, that allowed a motivated contractor to get one side completed and have construction on the other side well underway.”

With floodwater still impacting the area, two-way traffic is flowing on the completed westbound bridge. The two lanes of the eastbound side are expected to be completed later this year.

One key to success for this project - teamwork. Vortherms said, “I really can’t stress enough how the open communication, collaboration, and cooperation between all entities involved made this project work so well. Nine months ago we were issued a challenge to find a solution to the pinch point problem in this area and we met that challenge together.”

While this specific project dealt with one of the flood-related issues in Southwest Iowa, Vortherms cautions that there is still a lot of work to be done. “Eastbound Iowa 2 remains damaged east of the new bridge, reducing it to one lane in each direction in the westbound lanes. Solutions to resolve the issue of water overtopping the road in that area are being explored and a project is expected to be introduced later this year.