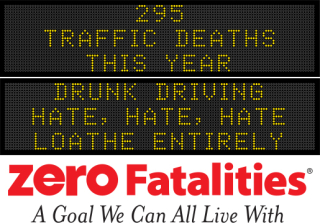 Was there a drink or two served at your family gathering or “friendsgiving” last week? Did you question any of the guests about how safe they felt driving home, only to hear, “I’m fine. I’ve just had a few.”

It’s time we all come to the conclusion that there is no “safe” level of drugs or alcohol in your system if you’re behind the wheel of a speeding 2-ton chunk of metal. If you feel different, you drive different. Whether that’s after two beers or two dozen.

Over the years attitudes about impaired driving have changed some, but not nearly enough for people to loathe the idea. Last year, more than 30 percent of all traffic fatalities, nationally and in Iowa, can be directly attributed to a driver who was impaired by drugs, alcohol or both.

As difficult as it might be, changing your attitude toward driving impaired and your behavior to focusing on finding a sober ride before you start drinking is going to much easier than having to make a confession like this - https://becauseisaidiwould.org/saveyourvictim/

For 2019, there have been 295 fatalities reported. That’s an increase of nine since last Monday. The 2018 fatality count stands at 319. This is subject to change as law enforcement reports are completed. To see statistics published daily by the Bureau of Driver & Identification Services, go to the daily fatality report at https://www.iowadot.gov/mvd/stats/daily.pdf.