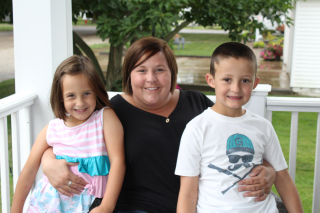 It’s an exciting time in the Danville home of the Boughton family. The backpacks are loaded and ready for Harris, 6, and Cate, 5, to start school. But the excitement over a new school year could have been eclipsed by tragedy. On July 19, Bridgette Boughton and her two children were in a crash on U.S. 61 between Burlington and Mediapolis.

“My husband Shawn and I have always been sticklers for making sure the kids are buckled up. It’s just what you do,” said Boughton, “But after the crash, it really hit me that my kids could have died without being properly buckled into those seats. It’s so much more than just a routine thing.” The day of the crash, the Boughtons were on their way to swimming lessons at the Mediapolis pool. They had been in Burlington and so the most direct route was U.S. 61. Boughton and the kids were traveling northbound. She saw a vehicle come to a stop in southbound lanes. “He was stopped waiting for us to go by, so he could turn,” said Boughton. “A car coming up behind him didn’t notice that he was stopped, and rear-ended him. I saw that wreck happen right before we got to the intersection. I turned to avoid the initial crash, but the car that was hit from behind sideswiped our car on the driver’s side where I was in the front and Cate was in her seat in the back. Harris was in his seat on the other side of the back seat in our car.” 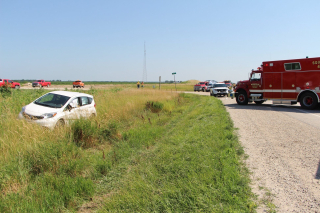 Boughton’s vehicle ended up in the ditch following the crash.

The Boughton vehicle’s airbags deployed, causing some minor scrapes to Bridgette’s arm. The seat belts caused some bruising on her neck and side, but the kids came through the crash physically unharmed.

Bridgette said, “The kids saw that mommy was hurt and that scared them. Harris even asked if I was going to die. As a precaution, we all rode in the ambulance to get checked out. The emergency crews took the kids car seats with us, so the doctors could look at them to double-check that the kids were okay.” 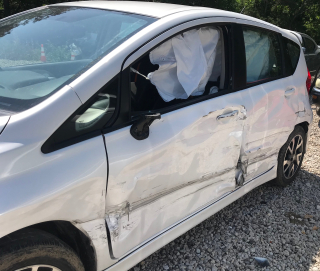 Although her vehicle was totaled, Boughton feels a sense of relief knowing that both her seat belt and her children’s car seats did exactly what they were designed to do. “I know there are a lot of different types of car seats out there and some people wouldn’t have even had a six -year-old in a car seat because the law doesn’t require it, but I’m convinced that those seats helped my kids come through this crash unhurt. Even though the law doesn’t require it, I know I will be keeping my kids more secure until they are big enough for an adult seat belt.”

Another lesson Boughton learned, once a car seat is in a crash, it should be replaced. She said, “The first thing we did was buy new car seats. The cost of car seats is nothing compared to my kids’ lives.”

The National Highway Traffic Safety Administration recommends replacing all car seats after a moderate or severe crash. Boughton replaced both car seats, even though Harris’ seat was on the side that didn’t get damaged.  She said, “Even though there wasn’t any visible damage to the seats, there’s no way to check to see if the LATCH system that held the seat in place will work the way it is supposed to in the future.”

To take seat replacement a step further, Saferide4kids.com says, “Many car seats need to be replaced if they were in a vehicle that is involved in a crash — even if the child was NOT in the car seat during the crash. Crash forces can be extreme. The seat will withstand some crash energy even if the seat were empty and even more so if the car seat was occupied."

The Boughton’s story ended happily because everyone was properly buckled up. To make sure you’ve done everything possible to be prepared in the event of a crash, the National Highway Traffic Safety Administration has a great website with to help you choose and install the proper seat for your child.