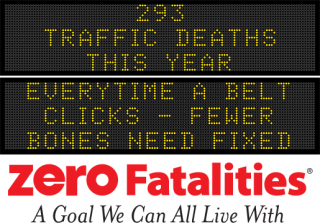 Count to three. That’s the amount of time it takes you to buckle up and reduce your risk of death or serious injury in a car crash. According to the Centers for Disease Control and Prevention, more than 2.6 million drivers and passengers were treated in emergency departments as the result of being injured in motor vehicle crashes in 2016.

It’s impossible to say how many of these injuries would have been fatal if the person hadn’t been belted, but it’s a proven fact that seatbelts prevent drivers and passengers from being ejected during a crash. The CDC data says people not wearing a seat belt are 30 times more likely to be ejected from a vehicle during a crash. More than three out of four people who are ejected during a fatal crash die from their injuries.

You might someday aspire to gain your angel’s wings, but for now why not do all you can to survive in the event of a car crash. In case you haven’t had your “It’s A Wonderful Life” fix yet this year - https://youtu.be/OfUV-F9jFro?t=1m4s

For 2018, there have been 293 fatalities reported. That’s an increase of five since last Monday. To see statistics published daily by the Office of Driver Services, go to the daily fatality report at https://www.iowadot.gov/mvd/stats/daily.pdf