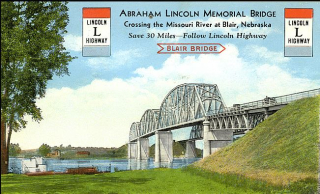 How do you get from Iowa to Nebraska? Well since there’s a river in between, we venture a guess that a bridge will be involved.

At one time not all that long ago, there was no national system of highways. Just because a road ran to the border of another state, there was no guarantee that the road would continue past the border. In addition, bridges, especially those crossing major rivers, were few and far between.

Luckily, transportation professionals quickly realized that the need for people and goods to move doesn’t end at a state’s border. Over the years collaboration and cooperation between states has continued to grow. Much of the work done at departments of transportation around the country has become standardized, helping travelers know what to expect and have a relatively consistent experience no matter what state they are traveling in. That’s not to say each state doesn’t have a few innovations up their sleeves.

Recently bridge folks from the Iowa and Nebraska departments of transportation got together to talk about bridge design, maintenance, and inspection.  Each state’s Federal Highway Administration division office also sent their bridge engineers. 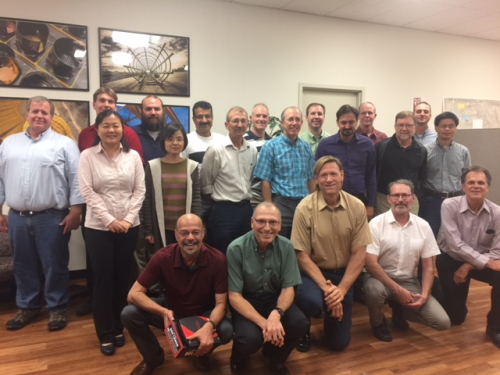 Topics primarily focused on sharing innovations each state is pursuing and how we are dealing with various challenging issues. Some of the topics of conversation included building bridges more quickly using a process called accelerated bridge construction and newer materials like ultra-high-performance concrete that can make bridges stronger.  Nebraska shared information on innovations in spliced precast girders, waterproofing membranes, and asphalt overlays on bridge decks.

Jim Nelson, Iowa DOT bridge engineer, said, “We have many of the same challenges with a number of aging bridges in our individual states. In the Midwest, de-icing chemicals are causing our bridges to deteriorate more quickly. There are similar and different approaches that each state is using to maintain our bridges and we like to be able to continue to adapt using lessons learned from each other.”

Approach slabs, the pieces of concrete that attach the roadway to the bridge deck, and empirical deck design, a way to design bridge decks that uses less reinforcing steel making the deck less expensive and less susceptible to corrosion, were discussed in considerable detail during the open discussion session.

Nelson said, “I think each state came away with things to think about and make improvements to current practices. In our discussion, one thing that we learned about was Nebraska’s experience with empirical deck design which has shown positive performance and results over time. This bridge design type is a different way to look at how concrete behaves with arching.  Based on Nebraska’s positive experience it helps give us confidence in trying an empirical deck design.”

After the discussion, we were able to take our visitors from Nebraska on a tour of the Council Bluffs Interstate System bridges under construction. Nelson said, “Holding meetings like this help foster relationships between our bridge experts that can be beneficial far into the future. It’s not just a meeting to talk about how we handle one specific issue, but more of a time to get to know each other and feel comfortable reaching out and asking questions or providing advice when asked.”

Excellent. I love the article and it makes you think (as an engineer) how to handle this. My family is all engineers also and my father-in-law build bridges out here in Cali. Anyway, great post. Thanks for sharing. If you get a chance, here are the articles (source) http://calcriminaldefenselawyers.com Cheers. Dave.

Hi Bill! You're in luck. Here's the link to the I-74 website that has webcams - http://i74riverbridge.com/traffic/webcams.aspx

And strengthen the top slab by accepting more of the weight which otherwise would be directed through the slab to the finished grade below the bottom of the approach. Doing this will reduce cracking and breaking of the approach slab and should reduce it's sinking in relation to the bridge.

As a 35 yr. retiree I am having the time of my life watching the I-75 bridge being constructed. I wish there was an known public overlook available where one could watch the construction with binoculars from either side. It'd be fun to be able to see my tax dollars at work because if you look while driving the old narrow spans you'll kill yourself. Is there a bridge cam for construction-- or several of them. Bill Burns, retired PR/photographer