Getting the blues is a good thing 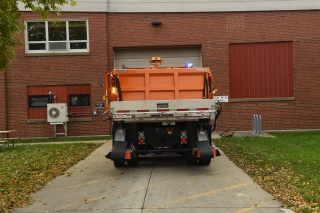 You would think a huge orange snowplow truck would be easy to spot, but in the midst of a winter snowstorm, even the behemoths that plow snow can become nearly invisible.  For those brave souls venturing out into the storm, the Iowa Department of Transportation is doing more than just plowing snow to keep you safe.

“Making our snowplow trucks as visible as possible is a major focus during a winter storm,” said Craig Bargfrede, Iowa DOT winter operations administrator. “Snowplow trucks typically travel much slower than other traffic only going around 35 miles per hour or less. When they hit drifts, they can throw large snow clouds around them. This can disrupt the vision of drivers in vehicles traveling around the plows and potentially create increased risks for crashes.” To make the plows more visible, the Iowa DOT began a legislatively approved pilot project in 2015 to add rear facing blue and white lights to the already existing amber systems on about 200 snowplows in central Iowa. Tina Greenfield from our maintenance office said, “Our proposal was to create a lighting scheme that isn’t found on any other vehicle. The amber-only lights we were using before are used on nearly every highway support vehicle. For the lighting we tested, we used blue, white and amber flashing in succession to make it unique to a plow. The rotating amber lighting is visible 360 degrees, but the blue/white/amber lighting is only visible from behind the plow. This gives drivers an early warning that there’s a plow ahead. Since rear-end collisions are the most common, we expected to and have seen a significant reduction in crashes with the new lighting system.”

The lighting scheme pilot project was a success. Here’s what the data shows: 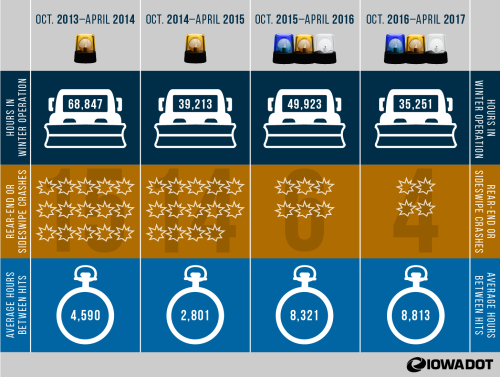 With the proven success of the pilot project, the Iowa DOT is now finishing installation and programming the blue/white/amber lighting systems on all our snowplow trucks. The cost of outfitting each truck is about $500, or $335,000 for the remaining 670 trucks in our fleet. This may seem like a lot of money until you compare that to the average cost of repairing the equipment most often damaged in rear-end and side-swipe collisions (salt spreader at $2,000-$3,000, a wing plow at $5,000-$10,000), the cost of the additional lighting can be recouped very quickly. Plus, having fewer trucks in the shop for repairs following crashes not only saves us time and money, it means more trucks are available to clear the roads.

Public safety is our number one goal. By incorporating this lighting package on our trucks, we are providing a safer environment on the highway system for the traveling public and our operators during winter operations.

Thanks for sharing This Article...
gts transportation

Thanks for always trying to serve the public safely and better.

Definitely. Too many speeders in these conditions is an accident waiting to happen.

I think this is a great idea to keep the snow plow driver safe and other drivers safe. I think fines for speeding during hazardous winter driving should be double just like construction zones. Be safe out there!