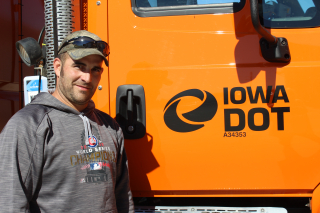 But Nate wasn’t alone for long. He got to Lake Red Rock and put his jon boat in the water. “I went up by the dam, but there were probably 15 boats already there, so I decided to go downriver,” Nate said, “I was trolling along and stopped to fish. I shot a really large, probably 40-pound, grass carp. I got it pulled into the boat but wanted to find someone to take a picture of it.”

Nate began to move the boat upriver and near the dam that was so crowded earlier in the day. “I went by the campground and thought about stopping to ask someone there to take a picture, but I kept going and saw a large group of people on the beach. I was going to get over close to them to ask one of them to take a picture, but just when I got there I saw kids in the water and then adults going in after them.”

Once Nate realized the kids were in trouble and adults didn’t seem to be able to swim, he floored the jon boat. “I got there as quick as I could with the small motor,” he said. “I just started grabbing people out of the water. I tried to position myself to grab as many as I could and get them in the boat. I threw the four life-jackets I had with me into the water to help the people still out there. I took the ones in the boat up to the beach and off-loaded them and then went back out.”

On the second rescue trip, Nate saw three people still in the water.  “I saw a woman, but all I could see was her hand. I grabbed her and pulled her in. She started to cough, so I knew she was going to be OK. Then I saw Lavandria.”

Eight-year-old Lavandria was floating face down in the water. Nate said, “When I pulled her in, her lips were blue, and she wasn’t breathing. I’ll never forget that little face, but I knew exactly what I had to do.”

Nate performed CPR on Lavandria in the boat and got the boat to shore. Emergency service personnel were arriving to help, but the family was still screaming about one more person in the water. So Nate went back out. He said, “The water was pretty murky. You could only see down about 18 inches. Charlie must have gone deeper because I went back and forth and couldn’t find him.”

The body of Charlie Lee, Lavandria’s uncle, was later found by the Pleasantville dive team about 20 yards from the scene of the other rescues.

“It all happened so fast, in three or four minutes,” said Nate. “I’m very appreciative of the CPR training I’ve had. Getting a refresher at work every two years definitely helped. I just knew what I had to do.”

Following the rescue, Nate tried to play down the events to honor the life of Charlie Lee and his family. “I didn’t really say anything at work, but some people found out from the news and came up to me to shake my hand. After it happened I was on an emotional roller coaster. I was angry that I couldn’t save Charlie and mad and sad for the family. My wife was a big help the first couple of weeks in helping me remember the lives that were saved. It took several weeks before I felt somewhat normal again. Once some time had passed, I truly felt like I was put there for a reason that day because seconds later could’ve been a whole different outcome.” 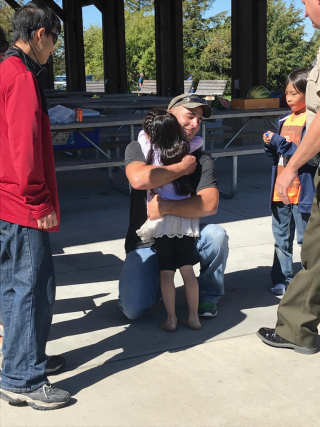 Nate got a big hug from Lavandria when they met in September.

Nate later learned that the group was an extended family from Minnesota, who took an annual fishing trip to Lake Red Rock.  In September, the family was reunited with their rescuer and his family. Nate said, “I wanted to meet them to get a sense of closure. The last time I saw Lavandria, she was dead. She wasn’t breathing, and I didn’t know if she was going to make it. To see her playing with her family and with my kids was amazing.”

Charlie Lee’s widow wasn’t able to attend the reunion, as the family has recently suffered another tragedy when Charlie’s mother passed away following a stroke she suffered the day after his death. Nate said, “Charlie’s wife wrote me a thank you letter. It meant a lot to me to hear from her.”

The family, natives of Laos, told Nate that he had saved the lives of nine people that day. “I wasn’t sure how many there were, “he said. “I thought I might have helped five. Law enforcement said seven and now the family was saying nine. In any case, it was a special time to get to meet them and hear about their lives.” 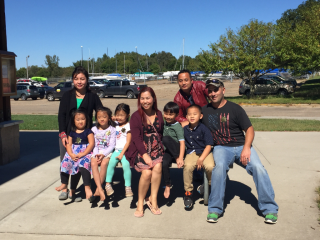 As time goes by, Nate and Lavandria’s father text back and forth occasionally and the Thayers are already planning for the Christmas gifts they’ll be sending to Minnesota to their new extended family members. 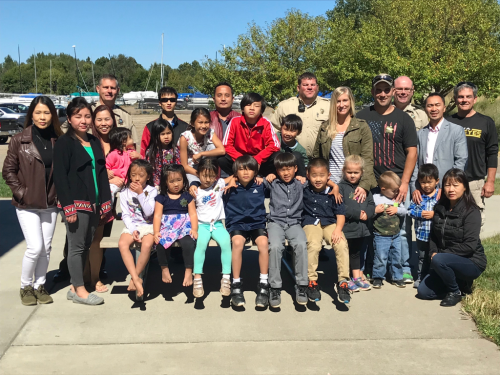 I’m a practicing surgeon from California and emergency scenarios and CPR are not foreign to me. Nathan is my Nephew and when I read the story of how he rescued these people without hesitation, it really warmed my heart. You were meant to be there on the lake that day and your bravery will always be remembered. I’m very proud of you Nathan. You’re my hero too!