You plan to stop and pick up a few things, so you get your list together, go to the store and pick up what you need. Or, if you’re an online shopper, just a few clicks of the mouse and your order is on its way.

The seemingly simple task of gathering the items you need has an incredibly complicated backstory. Message Monday - Sleeping at the wheel results in a wake Drowsy driving isn’t just a minor thing – it can be deadly. The National Highway Traffic Safety Administration estimates that driving drowsy causes more than 100,000 crashes, 1,550 deaths, and 71,000 injuries every year.

With Iowa’s many manufacturing, agricultural, and processing industries, long shifts are quite common and have caused drowsy driving to become a serious issue. Drowsy drivers have slow reaction times, often swerve in and out of lanes, veer off the road, and have a higher propensity to cause a crash. 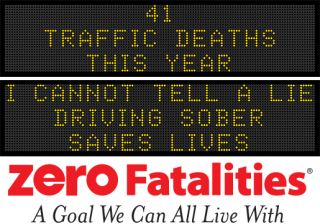 In honor of President’s Day, we’re speaking this truth – driving sober saves lives. Every day an average of 29 people in the United States die in crashes involving alcohol-impaired drivers. In 2016, U.S. families lost 10,497 loved ones due to someone getting behind the wheel after drinking. That’s about the same number as the population of Pella.

Message Monday - All you need is love ... and a seat belt The Beatles may have truly believed that all you need is love, but when you’re in a metal box traveling at 70 MPH down the interstate, buckling up can save your life.

According to the National Highway Traffic Safety Administration, Of the 35,092 people killed in motor vehicle crashes in 2015, 48 percent were not wearing seat belts. In 2015 alone, seat belts saved an estimated 13,941 lives and could have saved an additional 2,814 people if they had been wearing seat belts.

For 2018, there have been 36 fatalities reported. That’s an increase of 11 since last Monday. To see statistics published daily by the Office of Driver Services, go to the daily fatality report at https://www.iowadot.gov/mvd/stats/daily.pdf How much do you think it costs to clear Iowa's roads of snow and ice? When you see a snowplow go by during a winter storm, do you ever wonder how much it costs to get Iowa's roads back in good shape during and after a storm? If you’re a number cruncher or are just curious, you can see for yourself on a “Winter cost calculator” online tool developed by the Iowa Department of Transportation.

The tool was unveiled about a year ago. It lets users see the cost of material, labor, and equipment; pounds of salt applied; and labor hours expended for the previous 48 hours during winter weather road maintenance activities. Information can be found on the total cost of statewide cleanup efforts, or users can zoom to a specific area of the map to find costs associated with the area being displayed. Iowa’s seven largest metro areas are preloaded in a bookmarks tab for easy viewing. Bookmarks can also be set to locations of a user’s choice. All major sports celebrate that one player who not only performs at a personally high level but also holds the team together and helps everyone around them.

When it comes to getting home safely after celebrating, whether it’s a major sporting event or just a night out with friends, are you the person everyone can count on? Be the DD and become the MVP, that one player your team can’t live without.

Here’s a quick look at nine perks of being a designated driver - https://youtu.be/mh5OoPBX4GY

For 2018, there have been 25 fatalities reported. The 2017 fatality stands at 332. This is subject to change as law enforcement reports are completed. To see statistics published daily by the Office of Driver Services, go to the daily fatality report at https://www.iowadot.gov/mvd/stats/daily.pdf Information Provided by the Office of Employee Services