The hustle and bustle of the holidays is nearly over. As Iowans, we know what comes next. The seemingly long, cold, and dreary winter. Although some people, including many of our own Iowa Department of Transportation snowfighters, love to see winter in full swing, now is a good time to brush up on those winter driving skills around snowplows.

Craig Bargfrede, Iowa DOT winter operations administrator, says the main rule to keep both you and our drivers safe is, “Don’t crowd the plow.” “Maintenance vehicles plow far and wide — sometimes very wide,” he said. “The front plow extends several feet in front of the truck and may be very near the centerline and shoulders during plowing operations.” 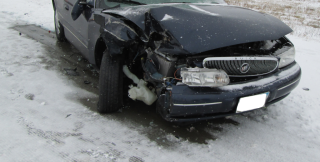 This vehicle was following too closely and hit one of our snowplows on Iowa 5 last year.

We all have places to go and things to do, but tailgating a snowplow is dangerous and can easily cause a crash. Bargfrede said, “Snowplows typically need to move slower than the flow of traffic to be able to do their job effectively. Sometimes it’s difficult to judge distance and it is easy to come up on them fast.” The most common type of crash with a snowplow is a rear end collision. “Please be alert when coming up on a plow and have a little patience. They need time and space to do their job effectively. When you do have the opportunity to pass, use caution. Last year we didn’t have much snow, but we still had eight Iowa DOT plows either hit from behind or sideswiped by other vehicles. In the 2014-15 season when we had more snow, there were 24 plows rear-ended or sideswiped.” What are some other things to watch for if you’re behind a plow? Bargfrede says snowplows stop and turn around frequently. On multi-lane roads, two or more plows may be working in tandem and can be in any lane. Also, in bigger storms, snowplows may need to stop or take evasive action to avoid stranded vehicles. “If you are following too closely, you may not be able to avoid the plow if this happens,” he said. When temperatures are very cold, snowplows will likely be dispersing either rock salt or sand from the back of the truck. “That’s just another reason to keep your distance from the back of a plow,” said Bargfrede.

Another thing Iowans may not have seen is a tow plow. Bargfrede said, “We now have 22 tow plows, mainly in metro areas and garages that cover the interstates. This equipment makes plowing multiple lanes with one vehicle much easier, but people may not be used to seeing them on the road.”

For more about tow plows, go to https://iowadot.gov/maintenance/winter-operations/towplows.

Driving around snowplows, whether it’s a traditional plow or tow plow, is similar to driving around other large trucks. Bargfrede said, “The driver’s field of vision is limited, so don’t travel beside a plow for long periods. Also, when plowing through a snowdrift or packed snow, the impact can move the truck sideways and cause it to move partially into the other lane.” A snowplow at work may create a cloud of snow that can reduce your visibility. Drive smart. Never drive into a snow cloud — it could conceal a snowplow or other object in your path.

The moral of the story is, if plows are out for ice and snow, take it slow. It will greatly increase your safety and those of the snow fighters out there helping you get where you need to go.

But do the plow operators have to obey traffic signals, stop signs etc.

Thank you for this report I now have a better understanding of how to drive around snowplows thanks.

Great Article!!!
The writer is very helping and caring as showing such a good concern about travel.
Thank you very much for sharing this article.
https://tulumknows.com/

Don't forget !!! These trucks, especially with a Tow Plow, cannot and do not stop on a dime!! Consider them to be just like a locomotive on the rails - stopping distances are not measured in inches. Keep well clear of them when following and especially when passing - if they hit a hidden slick spot and momentarily are out of control, in a collision, you will be the big loser. Even if you are legally right, injuries or death may result, and no amount of money can make your body as good as it was. I know. I've been there, and the five fractures in my pelvis still hurt at times after 53 years at age 71. Major internal injuries ended my Marine Corps career. As a professional OTR driver, I learned that if you are driving properly, aggravation and irritation on your part will not exist because you are too busy concentrating on your driving for other things to enter you mind.