Message Monday - Only zombies text or tweet from the driver's seat 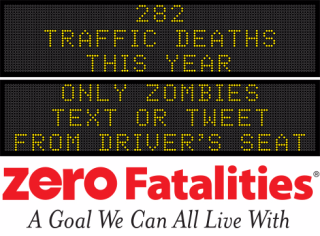 Are you a zombie and don’t know it? One definition of Zombie: mindless, unthinking henchmen under the spell of an evil magician.

When you’re behind the wheel, there’s nothing more important than staying alert to stay alive. Be aware of your surroundings. When you’re looking at your phone, you’re missing the signs and signals around you that could save your life.

The real Zombie Apocalypse is here and they’re staring at a screen -  https://www.youtube.com/watch?v=iJbqNiFDVtI

The fatality count of 282 is an increase of 12 since last Monday. In all of 2016, 402 people were killed on Iowa highways. To see statistics published daily by the Office of Driver Services, go to the daily fatality report at https://www.iowadot.gov/mvd/stats/daily.pdf Winter? What? Already? You may be dreading it, but winter is coming.

If you’ve lived in Iowa long, you know the weather can change quickly. Typically, the first significant snowfall doesn’t happen until November, but it always pays to plan ahead.

The Iowa Department of Transportation’s salt storage sheds are full and our equipment is ready to go for the winter. But what if you become stranded because of winter weather? Are you prepared?

DOTers band together to help one of our own We can’t begin to know what Milly Ortiz is feeling. Milly, the bicycle/pedestrian coordinator in Systems Planning, doesn’t know from one moment to the next if she’ll be able to talk to her aging parents in Puerto Rico.

When Hurricane Maria hit the U.S. territory earlier this month, Milly’s parents and disabled brother were cut off from any sort of communication for several days. Telephone service has been up and down, but Milly was able to confirm that her family was not injured and their home suffered only minor damage. It’s National Teen Driver Safety Week. As parents, we might feel like our kids don’t pay attention to what we do, but they’ve likely been watching your driving habits for a long time. What have they learned?

Parents - this time of year, the weather will be getting tricky, even for experienced drivers. Imagine what it is like for a teen who has limited experience driving in snow? Before you hand over the keys as the snow flies, spend a little time from the passenger seat talking your young driver through some of the special winter driving precautions. For years groups have been able to apply for what is known as an “emblem” license plate. Currently, we have approximately 40 emblem plates in production, and it can be difficult for county treasurer’s offices, especially in smaller counties, to manage the inventory for all the different license plate variations.

“The decal plate option will make inventory management easier for county treasurers and make it easier for non-profit groups to get their message out,” said LaVonne Short of the Iowa DOT’s Office of Vehicle & Motor Carrier Services, “The application process for a group to get an emblem plate required 500 paid applications before the plate would be produced. Over the years we’ve had dozens of groups qualified for an emblem plate, but they couldn’t muster up 500 paid applications within the year time frame allowed.” Preparing for Iowa’s transportation future means understanding not only the present and future needs but also studying the past. At the Iowa Department of Transportation, our environmental unit within the Office of Location and Environment is staffed by experts in wetlands, endangered species, air quality, traffic noise/vibration, regulated materials, and historical and cultural resources.

Iowa has about 9,400 miles of state-managed roads and 4,100 bridges under our care. Many of these roads and bridges were built decades ago and are in need of repair and updating to meet the transportation needs of today and into the future. When a need is identified, our engineers study many options to solve the problem. They prepare alternatives that are studied from many angles, one of which is the impact of the project on the surrounding land. If you spend much time on multi-lane highways, you’ll probably run into those drivers who think the left lane was put in specifically for them. That might be true, as long as the vehicles using the left lane are passing slower vehicles in the right lane.

On a highway of four lanes or more, the right lane in each direction is considered the driving lane and the left lane, the passing lane.  Although the Iowa DOT has 695 “SLOWER TRAFFIC KEEP RIGHT” signs posted on the Primary Highway System, not all drivers notice them or understand the meaning behind the signs. Others see the signs and think it gives them the right to tailgate or otherwise endanger the safety of slower traffic that might be in the left lane. For most truck drivers, pulling into an Iowa Department of Transportation weigh station for an inspection is routine. But for one Nebraska driver, that stop could easily have been his last.

On July 27, Jerald Kloppenborg and his wife were in their truck headed home to Nebraska. Kloppenborg knew he had a wheel seal leaking, but he was sure he could make it the 250 miles back home to fix it. “We were on I-380 between Waterloo and Cedar Rapids,” Kloppenborg said, “The weigh station was open, so we pulled in.” There’s an important question we ask anyone that applies for a driver’s license or ID card – would you like to become an organ and tissue donor? Although many people don’t realize it, driver’s license and ID card applications are the number one way people become donors. In Iowa, 95 percent of the people on the organ and tissue donor list signed up through the Iowa DOT. The employees in our driver and identification service centers, including the county treasurer’s offices that offer driver and identification services, play an invaluable role in increasing the number of registered organ, eye, and tissue donors.

During National DMV Celebration week, Sept. 25-29, Iowa Donor Network volunteers stopped by several Iowa DOT service centers and county treasurer’s offices to say thank you for the partnership and commitment to asking the donation question to their customers every day, helping to save and heal lives through organ, eye, and tissue donation.